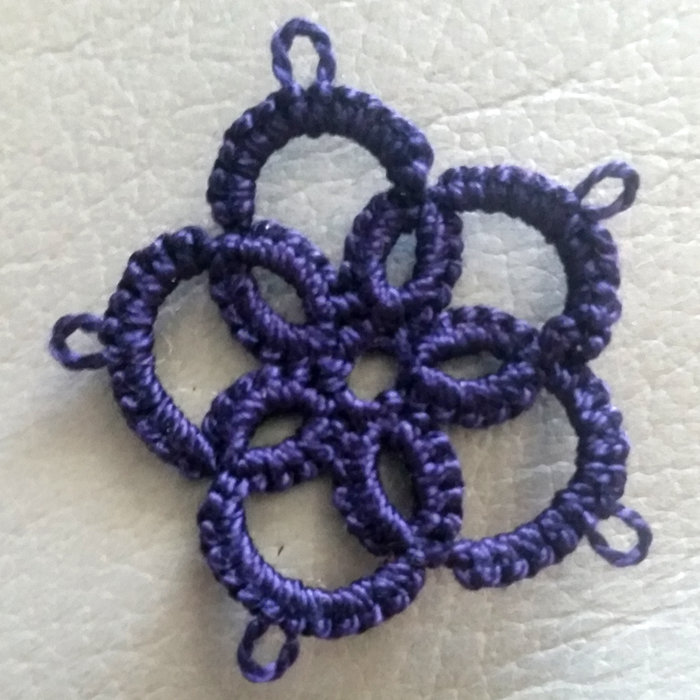 I remember a few years ago coming across a black, handmade lace choker on Etsy, and wondering if I could make it myself. It turns out, I could! How? By tatting! Tatting is a method of creating durable lace through the creation of a series of knots, and loops (called picots). My own obsession with tatting has been with an eye to craft and (eventually, I hope) design jewellery pieces like earrings, necklaces, bracelets, and chokers. But tatting is also used to craft doilies, baby clothes (bonnets and booties, in particular), home decor, Christmas decorations, and edgings on linens such as pillowcases, collars and tablecloths. I've even seen some tatted lingerie in my hunt for more alternative patterns (I'm not so much into the traditional uses for tatting, that's for sure).

The History of Tatting

There are no known recorded examples or documentation of tatted lace prior to the beginning of the 1800s, which dates tatting back to the early 19th century. In the book Knots, Splices and Fancywork, decorative ropework (for example, coxcombing), performed by sailors and fishermen for their wives and girlfriends back home, appears to have many similarities to tatting, and may have been what gave rise to the lacemaking technique. By the early 20th century, tatted lace had become very fashionable and was often featured in the home and fashion magazines at the time. It began to decline when modern fashion production made lace much easier to produce and cheaper to purchase ready-made. Unfortunately, the quality suffers now as well - whenever I buy anything edged with polyester lace, holes develop and it falls apart within the first few times I wear it. Handmade lace is still higher quality, and more sturdy, and it's better for the environment as a result.

There are two ways to create tatted lace - the first is with a small, boat-shaped shuttle, and the second is with metal needles of varying thicknesses (depending on the size of thread you use).

Top view of a tatting shuttle[/caption]

A shuttle is a small tool with two oval shaped flat pieces on the top and the bottom, flanking either a removeable or fixed thread bobbin. You can see both the top and the side view of a shuttle below.

When shuttle tatting, thread is wound around the bobbin in the center of the shuttle, and then a particular motion is used to create half-hitch knots, or double stitches as they're known in tatting.

Side view, where the thread is held[/caption]

With shuttle tatting, the knots are formed directly onto the thread being used, and so the finished piece can look finer with needle tatting, and it can also be harder to learn due to a certain flick of the wrist, and coordination necessary to get the knots to settle correctly. That's why a lot of beginners enjoy needle tatting first.

This means the knots can sometimes be a little bit bulkier on a needle than they would be on a shuttle, though it depends on the tatter's tension, the choice of thread size and the needle size used. I find I can make very fine, delicate work using a size 16 Presencia Finca Perle on a Size 7 Havel's stainless steel tatting needle. The rings created with needle tatting are typically "mock" rings, in that one must close them at the end of the series of knots in order for them to become rings. In order to stabilize mock rings, one must tie a knot at the base of each one. It is possible to create true rings with needle tatting, however, so that might be something to look into if you prefer needle tatting over shuttle tatting.

As you're hunting about the web for patterns, it can be helpful to know the terms you may run into for tatting in other languages (many beautiful tatting patterns are not avialble in English). The term for tatting in many European languages is derived from the French frivolité (meaning, of course, "frivolous" - which I absolutely adore), referring to the purely decorative nature of the pieces created from the technique. In Russian, the word is very similar - frivolitke. The German word for tatting is taken from the Italian word Occhi, or sometimes it's known as Schiffchenarbeit, (meaning "work of the little boat", or the tatting shuttle). Chiacchierino (meaning "chatty"), is the word for tatting in Italian.